Australia Awards alumna Lkhagvasuren Lamjav comes from the Orkhon province of Mongolia but has always dreamt of studying overseas with students from different cultures.

Lkhagvasuren first learnt about Australia Awards Scholarships while completing a Bachelor of Arts in Social Work at the National University of Mongolia in Ulaanbaatar, the country’s capital city. In 2017, she attended an information session about the Scholarships and the benefits they have to offer, which further piqued her interest to apply. She was working as a social worker at the Department of Youth and Family Development in the Orkhon province when she received an Australian Awards Scholarship in 2018 to undertake a Master of Social Work at Flinders University in South Australia.

Having upped sticks from Mongolia with the whole family, Lkhagvasuren greatly appreciates the support that Australia Awards provided for them while they lived in Australia.

“Australia Awards is a great opportunity not only for individuals but also for their families. As an Australia Awards recipient, our son’s education was free and that was a huge investment for our future,” she says.

While in Australia, Lkhagvasuren took the opportunity to travel around Australia with her family. She fondly remembers her visit to the Great Ocean Road in Victoria, and a trip to Sydney that she took with other scholars and their families.

As part of her course curriculum, Lkhagvasuren worked closely with social workers, which helped her develop her skills professionally and personally. She completed placements in two different institutions for a total period of eight months. She first worked in an elderly care centre for four months and then volunteered in an organisation that provided psychological counselling and economic assistance to the homeless. 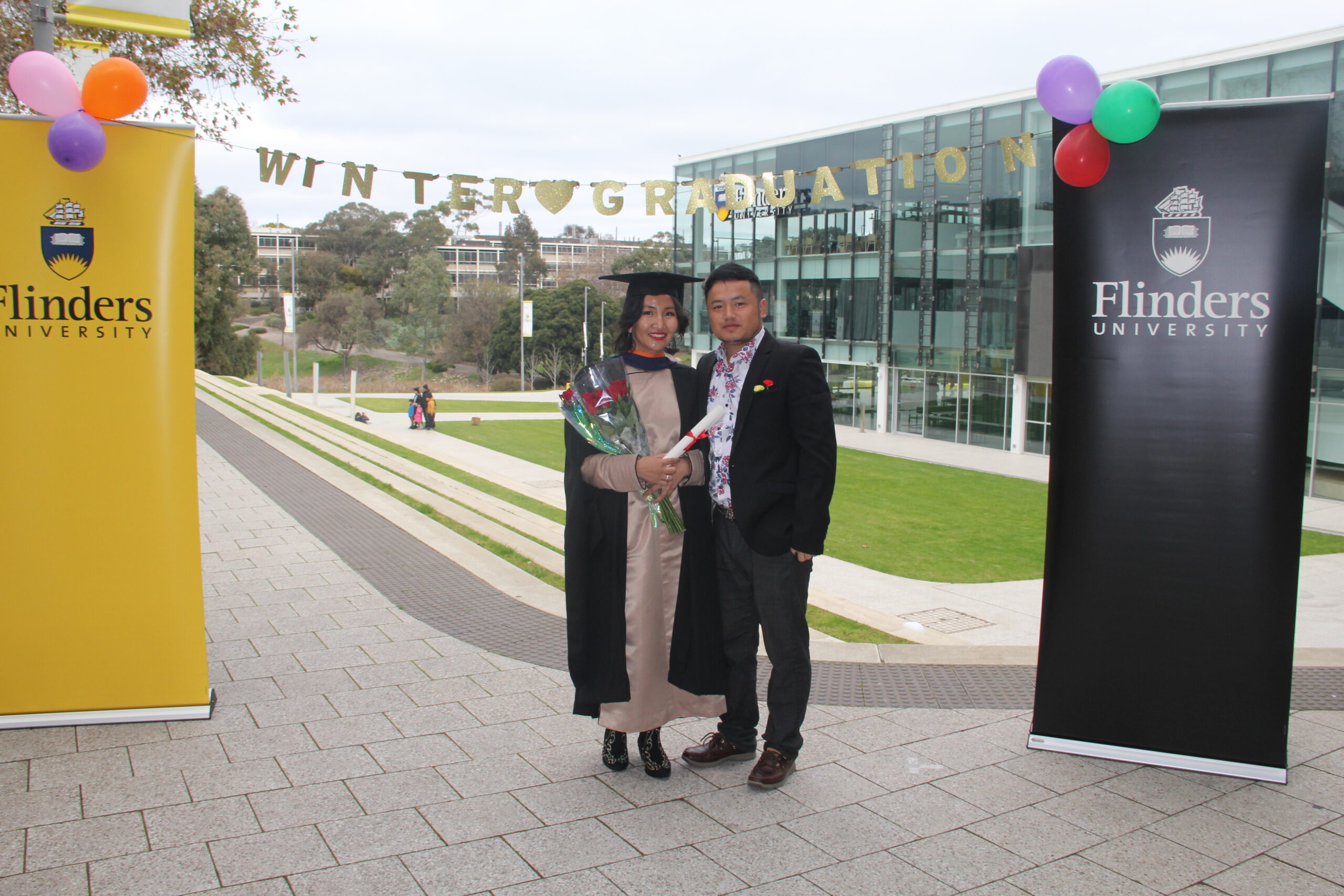 Lkhagvasuren with her husband during her graduation ceremony from Flinders University

Since her return to Mongolia, Lkhagvasuren has been working on a project funded by Save the Children Japan. In this role, she is providing personal skills and entrepreneurship training to teenagers and young people in 25 ‘soums’ (secondary subdivisions outside Ulaanbaatar) in five provinces. The main goal of the project is to improve young people’s skills, prepare them for the employment market and help them to create jobs in their remote soums. Lkhagvasuren has been using the skills and knowledge she gained during her study in Australia to improve these training programs and bring them up to international standards.

Earlier this year, Lkhagvasuren participated in an Australia Awards Short Course on Women’s Executive Leadership Development, which brought together female leaders from Mongolia’s public, private and civil society sectors who are working in urban and rural areas. The aim of the course was for participants to build networks and develop strategies targeting the transformation of women’s leadership in Mongolia. The Short Course supported Lkhagvasuren to further improve her leadership skills and helped her to create a network with women leaders in Mongolia.

She credits Australia Awards for equipping her with the knowledge, skills and exposure that have enabled her to make a difference for youth in her country, and is eager for others to access the same benefits. “I would like you not to miss out on this great opportunity,” she concludes.