Australia Awards in Mongolia’s commitment to social inclusion is in line with the Australian Government policies and its overseas aid program particularly in the areas of women’s empowerment and gender equality including the LGBTQI community, people with disability and provincial inclusion. Inclusion is managed as a cross-cutting issue in all aspects of Australia’s aid investment.

On Saturday, 26th June 2021, Australia Awards in Mongolia organized a “Networking before Naadam” Zoom event with the given theme of ‘Inclusion and Participation’. HE Mr. Dave Vosen, Australian Ambassador to Mongolia, HE Mr. Chuluunhuu Batlai, Mongolian Ambassador to Australia, and Australia Awards on-award and deferred awardees of Australia Awards Scholarships 2020 and 2021 were invited to attend the online event. The event commenced with opening remarks by HE Mr. David Vosen, who spoke of the difficulties that the COVID-19 pandemic has had and the importance to look after each other. Although HE Mr. Chuluunhuu Batlai was unable to attend the event, he sent his warm greetings to all attendees and wished all the best to on-award and deferred awardees.

During the event, virtual greetings from on-award scholars representing Adelaide, Melbourne, Sydney, Brisbane, Hobart and Perth, and deferred awardees of Australia Awards Scholarships 2020 and 2021 were presented. In addition, the following activities were organized a) an interactive online quiz on the topic of inclusiveness, gender equality and inclusive participation; b) a painting competition for families on the theme of inclusiveness and participation; and c) a Mongolian – Australian popular cuisine show. Musical performances from across Australia and Ulaanbaatar were presented – the special performance from the Ambassador and staff from the Australian Embassy in Mongolia was a highlight!

The event closed with greetings from the Australia Awards in Mongolian team and closing remarks by HE Mr. Dave Vosen, who expressed his appreciation for the event organizers, wished on-award awardees good luck for their studies and hoped deferred awardees would be able to travel to Australia soon. 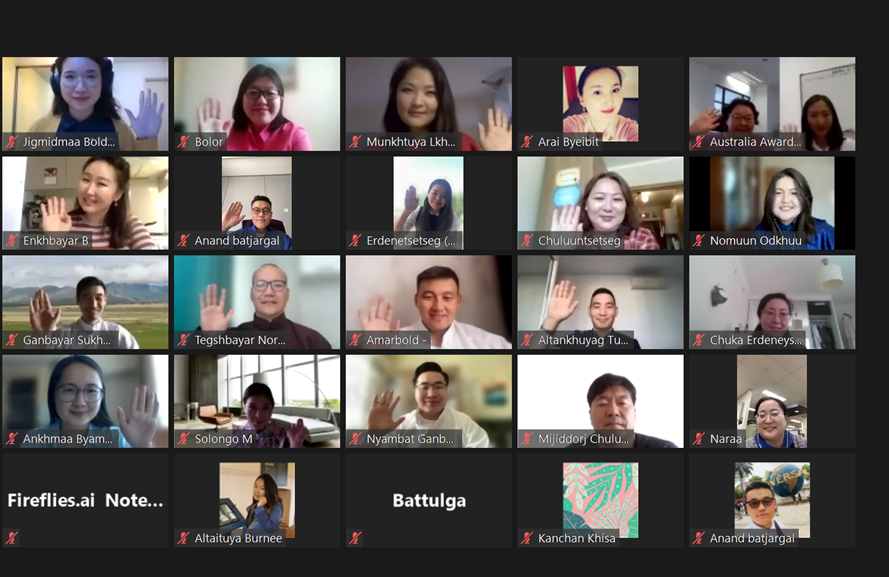