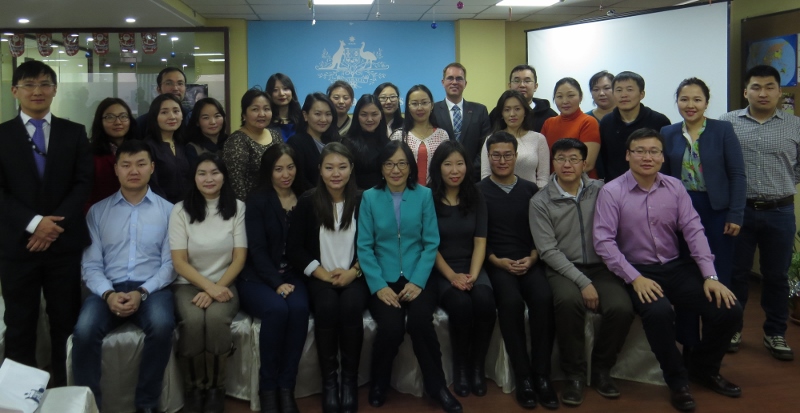 A Pre-Departure Briefing (PDB) for Intake 1, 2017 was conducted on 25-26 November 2016 at the Australia Awards Mongolia (AAM) conference room and attended by 30 awardees and 20 family members.

Ms Tsetsgee Yundendorj, Country Manager, AAM congratulated e awardees on their success on behalf of AAM team. She explained this intake was largest number ever to be mobilised and expressed her appreciation to DFAT for its continued support for Mongolians to study in Australia. She explained the two-day activities for the PDB before welcoming Mr. Shayne McKenna, First Secretary (Political) from Australia’s Department of Foreign Affairs and Trade (DFAT) to open the PBD.

Mr McKenna began by speaking on the “International Day for Elimination of Violence against Women”, emphasizing this was a priority of the Australian Government. He mentioned that funds were granted to the National Centre against Violence through the Direct Aid Program to support women and children escaping domestic violence in Mongolia.

Mr. McKenna expressed his delight at the awardees’ achievements from selection to their departure and hoped to be able to welcome them on their return. He hoped awardees’ studies would be successful and expressed DFAT’s expectation that they return to contribute to development in Mongolia in their diverse fields.

The second day was dedicated to cultural orientation and sharing experiences. Awardees were grouped into the cities where they would be living and learned from graduates and Australian Volunteers for International Development (AVIDs) from those cities.

The Mongolia-Australia Alumni Association (Mozzies) and Women’s Leadership Program (WLP) representatives made presentations and shared their personal and professional experiences.

In total, ten alumni, three Australian volunteers, a Mozzies board member and a WLP participant contributed to the PDB.