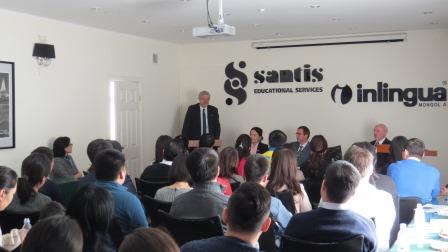 The Australia Awards Mongolia English language training courses, funded by the Australian Government, were launched at Santis Educational Services on 29 February. The courses will assist 34 selected awardees to improve their English language proficiency to meet entry requirement into their Australian universities. The launch was attended by His Excellency, John Langtry, Ambassador of Australia to Mongolia, Embassy staff, Australia Awards Mongolia (AAM) representatives, course students and teachers from Santis.

In his opening remarks, His Excellency, Mr Langtry, congratulated the awardees and wished them success in their studies. He explained that because of changes to budget allocations, the number of scholarships provided by the Government of Australia (GoA) had reduced in many countries, including Mongolia. He emphasized, however, the GoA will ensure that all current awardees in Australia can complete their studies and that every candidate selected in 2014 and merit-listed in 2015 will be mobilized within three years. As a result, the Program will not be promoted for new applications in either 2016 or 2017. His speech was warmly received by the audience as it clarified uncertainties that had lingered for some time.

Santis’s teaching team explained there would be two courses, depending on awardees levels of English proficiency. Those with lower IELTS/TOEFL scores will be released from their workplaces to attend a full-time 9-month course, while those with higher scores will attend a 10-week Academic Preparation course conducted jointly by Santis and Queensland University. Santis IELTS Teacher, Mr. Oliver Scott, focused on IELTS and academic studies in Australia while Santis’s Academic Preparation teacher Ms. Amalia Rubin, congratulated the highly-motived students with clear goals and said: “Bring yourself with your effort; leave everything else to Santis”.

Ms. Tsetsgee, Country Program Manager, AAM, welcomed students to the ELT, thanked the GoA for its continued support to young Mongolian professionals who are committed to contribute to Mongolia’s development after completing their studies in Australia. She stressed the compulsory and full-time nature of the courses, especially its face-to-face teaching/learning mode. She challenged the awardees to support each other and help Santis to help them to do their best.

Two alumni from the previous ELT program shared their learning experiences and provided constructive feedback to the Embassy, AAM and Santis on their achievements so far.

These presentations were followed by a short Q&A session in which the awardees again thanked the GoA for its support and asked questions, including the number of awards for particular intakes.

Mr. Andrew Orgill, Director of Inlingu school closed the event by saying that everyone in the room had a common goal to support each person to achieve his/her goal and have them ready to mobilise to Australia to begin their studies.